As part of her community engagement, Ghana’s Ambassador to the United States of America (U.S.A), Her Excellency Alima Mahama (Hajia), visited and interacted with the Haskay and Janna Ladies Muslim communities in Northern Virginia on Saturday, 29th January, 2022.

Haskay is an Association of Muslims, and their female counterparts are the Janna ladies. The thriving community welcomed Ambassador Alima Mahama and some senior staff of the Embassy of Ghana in Washington, D.C. to their place of worship (Masjid) in Woodbridge, Virginia.

Habib Mohammed, the President of the Association, introduced the Ambassador to the gathering after Islamic prayer by Imam Usman Suraj. The occasion was chaired by Umar Farouk.

Ambassador Alima Mahama, in her welcome address to the gathering, commended the Haskay and Janna Ladies for training their children born in the U.S. about the Islamic culture as the children recited verses from the Holy Quran.

On the state of affairs at the Embassy, she assured them that despite the challenges of COVID-19 which have created an unfortunate but unavoidable backlog with the issuing of visas, passports, and other consular services, her able staff have successfully improved services and are now operating within a decent time frame as far as timely turnover was concerned.

She spoke about the establishment of the Office of Diaspora Affairs at the Office of the President of Ghana. This office among other roles seeks to create a linkage between Ghanaians in the Diaspora and the Government of Ghana. Ambassador Alima Mahama therefore encouraged the Association to take advantage of this new office and liaise with the Embassy for information regarding it operations.

During discussions with the community, there were concerns raised about the National ID card being issued to Ghanaians abroad. The consular staff assured the group that after the completion of the exercise in Ghana, it would be extended to other parts of the world.

Ambassador Mahama admitted that though were some challenges with customer service at the Embassy, there had been a tremendous improvement within the last month with the recruitment a Customer Service Relations Officer (C.R.O.), as part of her personnel recruitment drive which she hopes will culminate in the engagement of more staff to help handle the smooth delivery of services in the Embassy.

The interaction ended with a well-wishing prayer by Imam Hamed Nazir.

Since taking office as Ambassador in June 2021, Her Excellency Alima Mahama has attended a few Christian Community events, including that of the inauguration of the Council of Ghanaian Pastors and Churches (COGPAC) in the USA and participation in a Catholic Mass with the Ghana Catholic Community in Arlington, Virginia. 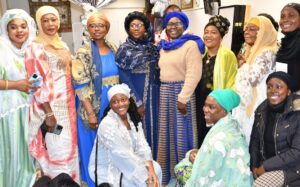 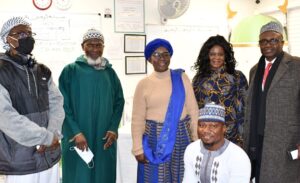 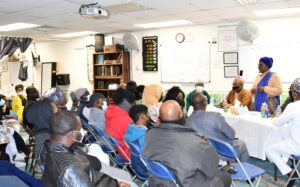 Story: Embassy of the Republic of Ghana, DC