GHANA’S AMBASSADOR TO THE UNITED STATES 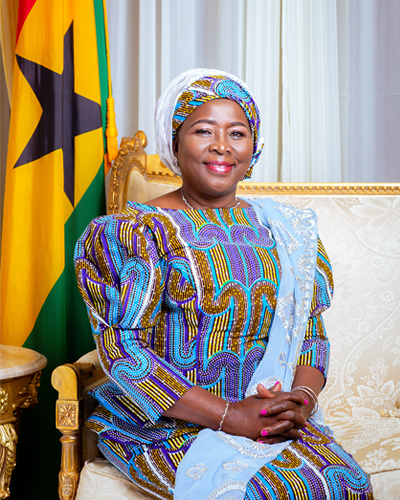 Hajia Alima Mahama was appointed Ambassador of the Republic of Ghana to the United States of America in June, 2021.  She is a product of the Ghana Law School and was called to the bar in 1982.  She holds a Master of Arts Degree in Development Studies with a specialization in Regional Development Planning from the Institute of Social Studies (ISS), The Hague in The Netherlands.

Ambassador Mahama is a Humphrey Fellow and participated in a Post Graduate Studies with Institutional attachments in Urban Policy and Planning and Women Studies under Hubert H. Humphrey Fellowship Program at Rutgers University. She was also affiliated to the Center for Women’s Global Leadership, the Center for American Women and Politics (CAWP) and pursued a three-month attachment at the World Bank.

She is a recipient of a Pearson Fellowship Award, sponsored by the Government of Canada and administered by University of Ottawa, Carleton University and the International Development Research Centre (IDRC). The program focused on Development Administration and Management.

Her passion for gender equality and, development and growth of children has been evident throughout her career and more especially in her contribution to the passage of the Domestic Violence Act and the Human Trafficking Act, as well as ratification of related conventions at the level of the African Union and the United Nations.  She was also influential in changes in Ghana’s National Health Insurance Law to improve maternal health and more.

As Minister for Local Government and Rural Development, she was instrumental in the formulation of the National Decentralization Policy and Strategy (2020-2040), developed to foster quality service delivery through a decentralized local governance system and active citizen’s participation to facilitate economic growth, income generation and poverty alleviation.

Ambassador Mahama served as Senior Technical Advisor for the program for the Attainment of MDG3 in Liberia (2009-2011), a program supported by the Government of Denmark to promote gender equality and women empowerment.  From 1987 to 2001, she served as the Senior Planner and Gender Development Coordinator of the Northern Region Rural Integrated Program (NORRIP), a Ghana Government and Canadian International Development Agency initiative.

Throughout her career, Hajia has held many prominent roles including serving as Ghana’s Deputy Minister for Trade and Industry, a Consultant for IFAD (SRDP & LACOSREP) OXFAM, and Action Aid Ghana.