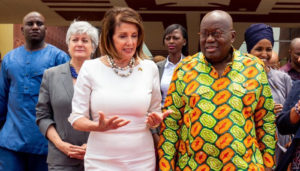 ACCRA, GHANA – U.S. House Speaker Nancy Pelosi is in Ghana with a U.S. congressional delegation for high-level talks and a commemoration of the 400-year-old slave trade from Africa to the New World. The visitors were to be received Monday evening by Ghanaian President Nana Akufo-Addo in Accra. They include the House Majority Whip James Clyburn, Congressional Black Caucus chairwoman Karen Bass and House representatives Barbara Lee and John Lewis, the Associated Press reported.

The delegation welcomed Sunday afternoon in Accra by U.S. Ambassador to Ghana Stephanie S. Sullivan and by Pelosi’s counterpart, parliamentary speaker Aaron Mike Oquaye — is expected to discuss “regional security, sustainable and inclusive development and the challenges of tomorrow, including the climate crisis,” the AP said.

Pelosi is scheduled to address Ghana’s lawmakers on Wednesday. Ghana’s foreign minister, Ayorkor S. Botchway, told reporters that Pelosi would “make an important address in the Senate, which will boost Ghana-U.S. relations.”

As part of the 400th anniversary commemoration of the first enslaved Africans landing in America, Pelosi will visit Cape Coast and Elmina Castle, and the Door of No Return, the gateway from which enslaved Africans were shipped across the sea.

Before the trip, Bass issued a statement noting, “400 years ago this year, our ancestors were first brought to (the future United States) in chains. On this delegation, 12 members of the Congressional Black Caucus will return to the African continent as members of the United States Congress. We have come so far, but we still have so far to go.”

Ghana expects tens of thousands of people with ties to Africa to mark the “Year of Return.”

En route to Ghana, the delegation visited Saturday with top officials of U.S. Army Africa at its headquarters in Vicenza, Italy.