Ghana participates in 5000 in role models of excellence project 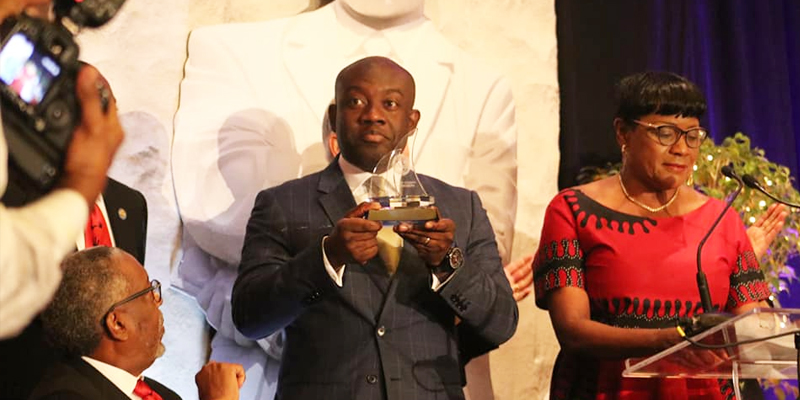 Ghana has been inducted into the 5000 Role Models of Excellence Project, an initiative created by United States’ Congresswoman, Frederica S. Wilson, aimed at preventing school dropout and saving minority boys from drugs and the criminal justice system.

The induction occurred at the 27the Annual Dr. Martin Luther King Jr Scholarship Breakfast on Monday, January 20, 2020, in Miami, Florida.

The event was the largest of its kind in the United States.

Ghana’s Minister of Information and Member of Parliament for Ofoase Ayirebi, Honorable Kojo Oppong-Nkrumah, represented the President and the country by joining several dignitaries including the Mayor of Miami Dade County, U. S. Senator Marco Rubio, the Ambassador of Rwanda, H. E. Mathilde Mukantabana, and the Ambassador of Mozambique, H. E. Carlos Dos Santos and others.

This year’s event marks the beginning of a partnership between the foundation and the Government of Ghana.

House Representative for the 24th Congressional district of the great state of Florida, Frederica S. Wilson, founded the group in 1993 to serve as an in-school dropout prevention and mentorship program with the objective to save minority boys from the pitfalls of drugs and violence.

Since its inception, about 27 years ago, the project has gained national recognition and has played a major role in shaping the lives of many young black and minority boys in the U.S. The foundation is extending its reach to Africa starting with Rwanda, Mozambique and now, Ghana.

Particularly, the newly formed partnership with Ghana finds its strength on the principle that education and formal training are the tools to develop black youth to become formidable leaders of tomorrow.

Prior to the Breakfast meeting, the Minister of Information attended a networking session with the Mayor of Miami where dignitaries and stakeholders of the foundation met to discuss aspects of the initiative, highlighting its areas of success.

By partnering with the group, Ghana hopes to formulate a mutually a beneficial relationship where both parties can learn from each other and engage in some mentorship exchange program for young boys.